You are here: Home / Contemporary Fiction/Classics / Review of A Tree Grows in Brooklyn by Betty Smith 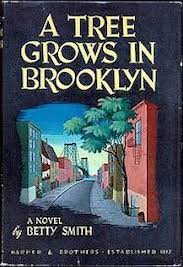 A Tree Grows in Brooklyn is a historical novel that takes place in Brooklyn at the beginning of the 1900’s to about 1920 and chronicles the life of young, bookish Francie Nolan and the rest of the struggling, impoverished Nolan family. Francie’s father (whom she adores) is an alcoholic and works intermittently as a singing waiter, and her mother works as a scrubwoman cleaning local apartments.

Francie’s mother encourages her and her brother Neely to read and to study as much as possible because as she tells them, education is the only way they can lift themselves into a better life. That being said, Francie’s mother makes Francie read pages from Shakespeare and the Bible every night, and because of that, Francie develops a voracious reading habit. Her intelligence and her razor-sharp observation skills cause her to develop a maturity far beyond her years, and I found it fascinating to watch her mature as the story moved forward.

But It’s not always very easy going for Francie. Being sort of a misfit, she is bullied, mocked and often criticized by both her family and society. Yet she’s a resilient girl and is able to keep moving forward regardless of her hardships.

Actually, Francie’s world is pretty tough overall as her family has to struggle with finances, brutal work and unexpected death. The Nolan family is poor — very poor — but they manage to eke out a living for themselves with plenty of hard work and sacrifice. In spite of being so impoverished, I found it interesting how Francie’s mother was entirely against any form of charity even if it meant some hungry nights for all of them. She was determined to get by on her own hard work and not on handouts.

Though at first glance, the novel seems to be a series of snapshots anecdotes portraying the family’s hardships and Francie’s growing pains, we also see an evolution of the Nolan family as the years pass and the children mature and become more and more educated. And despite the hardships and challenges of daily life, there is also a great deal of happiness. Happiness resulting from the love of family. Happiness coming from successes and triumphs here and there that provide not only hope but a desired to strive to better our circumstances.

This is a captivating story of a girl’s coming of age under more than challenging circumstances. I felt that Francie’s story is still surprisingly captivating and relevant today in spite of taking place over a century ago. The reasons for this, I think, is that Francie and her family experience the same things we all do: love, birth, death, difficult circumstances, marriage, struggle and striving to better ourselves. It’s an inspiring story about the resilience of the human spirit and how determination, self-awareness, and sacrifice can help us improve our circumstances.

The book is bleak in some parts, heartfelt and hopeful in others. It’s tragic and funny, heart-wrenching and heart-warming. It does deal with some serious topics such as poverty, alcoholism, exploitation, sexual abuse, child abuse, grief, and death but there is also success, aspiration and ultimately hope.

All in all, it’s a heartfelt, well-written story about a young girl’s coming-of-age at the turn of the 20th century and I thoroughly enjoyed being transported to another time to catch a glimpse of what life was like for the Nolan family. The lyricism in this book flowed beautifully, and I’m so glad that I read this classic.

Now I will say that this book wasn’t heavy on plot or action and it took me a while to get into this story. I was about 40 pages in and considered DNFing it. But I’m happy I stuck it out as I found it to be a compelling, moving story full of rich, interesting characters.

This review originally posted on my book review blog at rogersreads.com.

Purchase A Tree Grows in Brooklyn at Amazon

Purchase A Tree Grows in Brooklyn at The Book Depository