You are here: Home / Suspense/Thriller / Review of A Noise Downstairs by Linwood Barclay 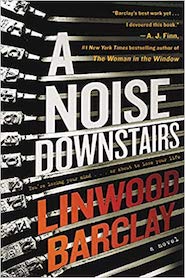 This novel follows Paul Davis, a college professor who, one evening while driving home and notices a car swerving all over the road. Moreover, he recognizes the car as belonging to a coworker and friend, Kenneth Hoffman. Paul, worried about Kenneth and fearing that he may need help, follows him, hoping that he’ll pull over. So Kenneth finally pulls over in a deserted area, and Paul does likewise.

But as it turns out, Paul is the one who ends up needing help because to Paul’s horror, he quickly learns that the reason Kenneth pulled over was to dispose of the bodies of two young women that were wrapped in plastic in the back of his car. Kenneth apologizes the Paul right before he hits him across the head with a shovel.

So fast forward several months later. As it turned out, a policeman arrived that night just before Kenneth was about to deliver a fatal shovel blow and was arrested for the murder of the women. Thus, Kenneth is in jail, and Paul did survive the head wound–but with some serious consequences: His mind is forgetful and frightening nightmares plague him as he tries to understand how his friend could be capable of such a brutal act.

Apparently suffering from PTSD, he’s currently being treated by a psychologist and together, they’re working on getting Paul’s life back on track so he can move forward. In fact, Paul decides to confront his demons head on, but we can’t help but wonder whether in doing so, he’s making the situation worse. I found it interesting that a good part of the action in the novel alternates between the interconnecting stories of Paul and those of his psychologist which helped coalesce the various plot threads at the end.

However, things turn worse for Paul when his wife Charlotte comes home one day with a vintage typewriter for Paul – so he could record all the traumatic events in a cathartic way, to help heal, an and maybe even turn it into a book. He wakes up in the middle of the night to the sound of the typewriter’s keys tapping away, as though someone is typing on it – but when he goes downstairs to investigate, there was no one there. This happens again and again, but Charlotte doesn’t hear a thing. The situation becomes even more dire when the phantom typewriter begins to produce messages reminiscent of those that the murderer forced the two victims to type before killing them.

As the story moves forward, Paul appears to be losing ground, and he hangs on the very edge of his sanity.

So several questions remain: Has someone been breaking into his house at night? Are the typewriter noises a product of Paul’s damaged mind or is there something else going on here? Something perhaps even supernatural?

I loved how creepy this story was. For many of us, the strange sounds that we hear once the lights are turned off are a source of consternation. I’ve gotten the willies more than once as I lay in bed after hearing what I’m positive was someone walking through the living room of my supposedly empty house. So Paul’s experience with the mysterious typing really hit a nerve.

That being said, it was such a fun story to read, as we wondered whether Paul was imagining things or whether there actually was an intruder coming in at night to torture Paul. And if so, why?

Towards the middle of the book, I thought I had it figured out and was a tad disappointed by that. But I was wrong in that assumption. The author threw out some clever red herrings and amazing twists and turns that threw me off the scent of what really is going on. When I was sure I knew what was going on, the author plopped down a twist that thrust me in a completely different direction. In fact, this book contains several mysteries which all come together in an explosive and surprising conclusion that had me on the edge of my seat. I especially enjoyed the fact that nothing is as it seems in this story, including the characters.

And I also really loved all the characters — very complicated characters, I might add — whose true motivations don’t become clear until later on in the book. I felt the author did an exquisite job with the characterization in this story and gave us an interconnected cast of believable, multi-layered and complex character characters many of whom were more than a tad dodgy in my opinion, which deepened the mystery even further.

I didn’t have any significant niggles with the story except for perhaps the ending. It was kind of fantastical and maybe just a tad over the top, much like the ending of an Italian opera. After I closed the last page, I said to myself, “huh,” not quite sure how I felt about it. But upon reflection, it was mostly satisfying and masterfully plotted.

A Noise Downstairs is a well-written domestic psychological thriller featuring an enthralling though bizarre plot with riveting characters. From start to finish the story held me in rapt attention until the jaw-dropping conclusion, and I’m so glad I picked up this novel.

All in all, the story was brilliantly paced, well-constructed, and cleverly executed, and I ended up loving it – although now I have to sleep with the light on. Recommended! ⭐⭐⭐⭐