You are here: Home / Contemporary Fiction/Classics / Review of A Man Called Ove by Fredrik Backman 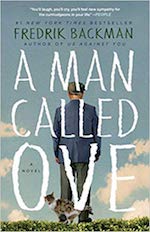 This is my first Fredrik Backman novel, and all I can say is: why did I wait so long?

This book follows a Man named Ove who is the cantankerous, curmudgeonly, grumpy and unfriendly neighbor that many of us have. He complains about everything, and he’s the kind of angry man who puts up signs around is neighborhood warning other about what they can and can’t do. He loathes technology and misses the days gone by when people could fix their own cars and knew how to repair things around their house.

For him, everything is black and white, and there’s a proper place for everything. If you don’t follow Ove’s rules, you’re an idiot — and he won’t hesitate to tell you so.

Ove’s tale unfolds when a new family moves into his neighborhood: Parvaneh, a very pregnant Iranian woman, her inept and lanky husband Patrick, and their two little girls. On the day they moved in, not only did they drive in an area where the sign clearly states that parking in residential areas is prohibited, but they also flattened Ove’s mailbox. We can certainly imagine how this unfolds.

But there’s a lot more to Ove than meets the eye. You see, his wife — the love of his life and the only person who really understood him — passed away recently and it’s quite apparent that Ove his still quite stricken by grief.

Lonely and depressed, he has no friends and he we get the impression that feels as though he’s outlived his usefulness. In fact, all he wants is to be left alone so he can put his plan together about how to join his wife in the coming days.

But the neighbors aren’t going to make it easy for him. Despite Ove’s repeated attempts at pushing everyone away, Parvaneh ends us striking up an odd friendship with Ove, and a good part of this book focuses on that friendship. She is determined to pull Ove from his self-imposed isolation often with quite hilarious results. Hell, she even manages to talk Ove into giving her driving lessons which had me laughing out loud.

There are also numerous other neighbors who come to him for assistance, interrupting his quiet, lonely life. But he always helps them because he can’t stand to watch them making a mess of things. There’s even a mangy alley cat who decides to adopt Ove, which led to some very touching and amusing scenes.

First off, this book had me laughing hysterically one moment, and dabbing at tears the next. So in this way, it was a heart-warming, funny and touching story. The excellent characterization drew me right in, and it was only with the greatest of reluctance that I let go at the end.

All of the characters were wonderful. They were well-fleshed out and utterly relatable. These are unique, multi-faceted characters who all have very human faces – ordinary people we could see in any neighborhood of any town or city, and the way they related to one another was delightful.

It was also fun to watch Ove rage against the machine as it were — specifically against bureaucracy and “men in white shirts.” I mean who of us hasn’t been there? This made me think of Doctor Who and his dislike of “men with clipboards.”

Now you may think: why would I want to read a book about a crabby old man? The thing about this story is that as it progresses, Ove becomes more ingrained into the lives of others and them into his, and in that process, he becomes more human, a delightful process that we get to watch unfold. The story weaves back and forth between Ove’s past and present, and we learn, in quite an eye-opening way, what brought him to this point in his life and we discover why he is the way he is, leading to an understanding and empathy with this angry man who we may have disliked at the beginning of the book. This is a perfect example about how we can’t “judge a book by its cover” and how we can’t really know a person until we discover their past and the events they’ve gone through in their lives.

There were no niggles nor anything else that I disliked about this book. The only thing I didn’t care for was the exhaustive list of every car that Ove and his neighbor owned throughout the years. I found this kind of unnecessary but then again, I’m not a car person so this part I found a tad boring.

A Man Called Ove was an inspirational laugh out loud masterpiece that touched my soul with a beautiful, satisfying ending. This story is as thought-provoking and hopeful as it is emotional and sobering and I enjoyed every single moment of it. This is such a smart story, an eye-opening account of letting go of prejudices, of seeing beyond what we think we know. I believe that Backman exhibits an uncanny insight into the human condition and in so doing, causes us to care deeply about this grumpy old curmudgeon who does everything in his power to render himself unlikeable.

This was a touching and somewhat bittersweet tale of a lonely man trying to live in a world that is a little bit beyond his understanding and definitely outside of his comfort zone. But this wasn’t merely a story about a crabby old man, but instead, it is about love, kindness, and most importantly friendship. Though Ove may not seem to be a likable and relatable character initially, if you give him a chance, this old grump will steal your heart. He did mine.

This may end up being one of my favorite reads of 2018, and now I want to read everything I can by this author. Needless to say, this is a 5 star read for me.

You can check out A Man Called Ove here at Amazon or at The Book Depository.