You are here: Home / Suspense/Thriller / Review of A Dark and Secret Place by Jen Williams 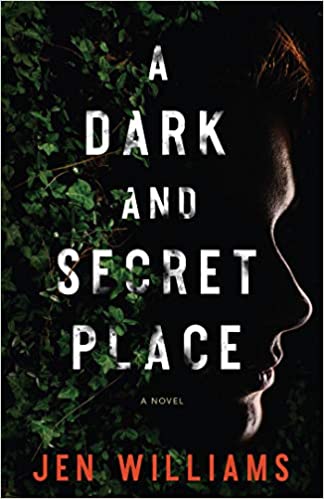 A Dark and Secret place is a bone-chilling and quite disturbing multi-layered thriller that follows our main character Heather Evans, a grieving daughter and former journalist who returns home after her mother Colleen’s death by suicide. It’s worth mentioning that Heather and her mother weren’t all that close, and for the most part, they’ve been estranged for several years.

Still, Heather is perplexed as to the reason why her mother would ever kill herself — it just makes no sense. What makes even less sense is the tin of letters that Heather finds in her mother’s home from the monstrous notorious serial killer Michael Reave aka “The Red Wolf.” Reeve has been in prison for over 20 years for the gruesome murders of several women, though he has always proclaimed his innocence. Apparently, her mother had corresponded with the man for decades.

Now there is a new murderer who is murdering women exactly in the same ritualistic fashion as the Red Wolf, such as the meticulous arrangement of the bodies, missing hearts, and the corpses adorned by flowers. Of interest is that some of these aspects were never released to the general public by the police.

So this novel then asks several questions: Did Heather’s mother know anything about the murders? Why did she kill herself? Is Reave really innocent, and if so, why has the murderer waited until now to strike again? Or was Reave working with another killer all along? How did her mother know Reave?

Apparently, Heather didn’t know her mother as well as she thought she did. Heather, now obsessed with her mother’s hidden side, decides to share her information with the police, and they offer her the opportunity to talk to the enigmatic Reaves in person, perhaps hoping to glean some information about the new murders that are occurring as well as for Heather to hopefully learn more about her mother’s secrets.

Surprisingly, Reave agrees to talk the Heather though he hasn’t spoken to anyone in years. I thought the interactions between Heather and Reave were exceptionally captivating and of great interest to the story. But after she speaks to the killer at the prison, strange things begin happening to her, such as feathers and flowers appearing in her house, cryptic, threatening messages, and the constant feeling she’s being watched. As Heather delves more deeply into her mother’s past, the situation escalates, leaving Heather to realize that whoever has been committing these new murders appears to now have their sights set on her.

What follows is a bleak, dark, and unsetting story as someone begins playing mind games with Heather. There’s a continuous and subtle creepy vibe to the story that continues through each page. And yes, the creepy feeling at the back of my neck as I read was 100 percent real.

Given that I’ve always been intrigued by the thoughts and motivations of serial killers, the story sucked me in right away. What’s interesting about the story is that it goes back and forth between following Heather in the present time and going back to following Michael in the past when he was a young boy and has just murdered his mother.

Now even though Michael has consistently argued that he’s innocent of murdering those women, the past flashbacks of his actions suggest the possible beginnings of pathological traits associated with psychopaths. I found Michael’s “before” chapters to be especially compelling. Additionally, we get a POV chapter by each of the murdered women shortly before their death which added an extra disturbing element to the story. Heather also learns that the more she uncovers about her mother’s past, the more she realizes how little she actually knew her mother.

Now I word of warning here. This is quite a dark book, and it delves into some pretty disturbing places. But there is one especially wrenching scene involving the cruelty and subsequent death of animals. So if this is something that especially bothers you, consider yourself warned. This is the only animal cruelty scene in the book, and its purpose is to expose us to the thought processes of a serial killer.

I also didn’t care all that much for Heather as a character. She was mostly unlikeable and made several irrational decisions. At one point, I thought that I wouldn’t feel all that bad if she got herself killed. My dislike for her only increased as remnants of her past were revealed. But she kinds of redeems herself at the end of the book, though she never came across as being entirely likable. So if you need to absolutely love the main character in order to like a book, then this one might not work the best for you.

All in all, this is a spine-tingling and insanely twisty psychological thriller, and the fun of it is separating fact from fiction. It’s a swarming, paranoid, and at times an excruciating nightmare of a novel with a mind-blowing ending and super creepy settings. I thought it was an exquisitely crafted portrait of creeping madness and murder that drew me in and didn’t let go until the jaw-dropping and bonkers conclusion.

Note that this book will be released in the UK as “Dog Rose Dirt” and in the US as “A Dark and Secret Place.”

This book will be released on June 8th but it is available for preorder now.

Order A Dark and Secret Place from Amazon