You are here: Home / YA Fantasy/Urban Fantasy / Review of A Curse so Dark and Lonely by Brigid Kemmerer 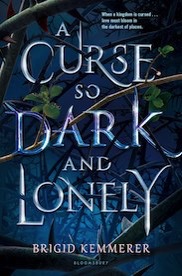 I’ve been a fan of Brigid Kemmerer ever since I’ve read her Elemental series years ago about four brothers with magical powers, so I was excited when I heard that she was doing a contemporary fantasy retelling of Beauty and the Beast, though it’s much darker than the original tale. I immediately pre-ordered it and read it the day I received it in the post.

The story follows the enigmatic Prince Rhen, AKA “The Beast,” crown prince of Emberfall who was cursed by a powerful enchantress named Lilith. How his curse works, is that for the past 300 plus seasons, Rhen has repeated the autumn of his eighteenth year over and over, after which he turns into a different beast every time but a creature hell-bent on destruction. Over the years, he — or the beast — has murdered his family, his guards, his army and many innocent townspeople. In fact, a man named Grey, Rhen’s loyal guard commander, is the only living person left at the castle with him and Prince Rhen’s only friend.

Now the stipulation of the curse, is that it can be broken only if a woman falls in love with him before the end of autumn and each season Grey, who has the power to travel to our world, captures a girl and brings her back for Rhen, hoping that perhaps this time, she will be “the one.” Of course, it’s not easy to love a blood-thirsty beast, so he hasn’t been successful in finding his true love.

At this point in the story, overcome by angst and tragedy, he has pretty much given up all hope given that he’s pretty much lost everything over the years; his family, his kingdom, the respect of his people and eventually, his friendship with Grey. He’s also ripped apart by guilt for every vile act he’s committed during his time as The Beast. At this point, he longs for death.

Enter Harper, a young woman with cerebral palsy whose mother is dying, and her brother is in a whole heap of trouble with the both of them desperately trying to hold their family together. When she tries to save a woman who appears to be in the process of being abducted, she ends up sucked into a parallel world — Rhen’s world to be exact — with no way back home for at least an entire year and ends up being the latest pawn in the “break the curse” game.

Now Harper is not a pushover, but a firecracker of a woman — determined, resourceful and scrappy who refuses to play the role of victim. But as she spends more time with Rhen and the people of Emberfall, she begins to understand just how much is at stake. Rhen soon realizes that this woman is entirely different from the many, many others he has tried to charm. She mocks him, fights against him, taunts him, antagonizes him and before he realizes it, begins to fall for this feisty woman — a woman who challenged him to be more, to be better, to be who he was meant to be.

Because of Harper, Rhen soon finds himself daring to hope for the impossible — that there may be a way to breaks his curse after all.

But there is more going on here than just Prince Rhen’s curse. Powerful forces are threatening to destroy Emberfall, and its people and our characters soon understand that it will take more than ending the curse to save the kingdom. Harper has to make a powerful choice: go home to save her family or stay in Emberfall and save Rhen’s kingdom.

There is so much to love about this book, but I especially enjoyed the fresh, original take on one of my favorite classic fairytales. I do love retellings, and this was definitely one of the better ones with a delightfully chilling villain; a fierce and determined kick-ass heroine, high-stakes political intrigue that builds throughout the story; a handsome yet someone angsty prince; a mysterious storyline; a looming war; and the colliding of the modern world (DC to be exact) with a fantasy medieval-feeling fairytale kingdom. This reimagining ticked all the right boxes for me. I loved how every character in the book became a better version of themselves by the story’s end.

Harper was my favorite character. All of her life because of her Cerebral Palsy, she was seen as weak and as someone who needed to be protected, especially by her brother Jack. But in Emberfall, she really came into her own and took charge – and instead of needed to be protected, she filled the role of the compassionate protector of others.

And rather than being defined by her handicap, she rose above it by sheer will and determination, and in so doing, ended up accomplishing amazing things. She’s definitely the least classic fairytale princess that I’ve come across, and I loved her for it.

The story is told from Rhen and Harper’s alternating points of view which helped get to know the characters and what makes them tick. Usually, I’m not a fan of dual POVs, but I thought it worked exceptionally well in this instance.

All in all, A Curse So Dark and Lonely was a delightful, fast-paced, action-packed retelling of an old favorite with evocative imagery, beautiful writing, amazing characters, and exquisite world-building. Though the ending was entirely satisfying, I understand there is going to be a sequel entitled “A Heart So Fierce and Broken,” and I for sure will be picking it up. But yeah, this was a solid 5-star read for me.

Purchase A Curse So Dark and Lonely at Amazon

Purchase A Curse So Dark and Lonely at The Book Depository