You are here: Home / Fantasy/Urban Fantasy / Review of Elantris by Brandon Sanderson 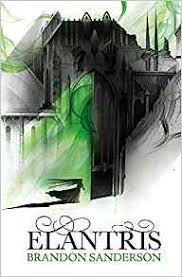 This was a book I’ve been meaning to read for quite some time now — it’s been actually on my shelf for a while now, so I finally managed to pick it up. The story was fascinating!

The story revolves around Elantris the capital of a country named Arleon. I know — the names in high fantasy novels can be somewhat challenging. So The inhabitants of Elantris — they were all transformed by magic, which turned them into what can best be classified as demigods. In fact, many of the people in the country revered the Elantrians them as gods. They could perform all kinds of magic including teleportation and healing the residents of Arlean.

But then one day it all went to hell — it all turned sour. With no warning, the magic dried up — it simply disappeared one day. But that’s not all — all the inhabitants of Elantris — the people who had magic — were now turned into pitiful creatures that were more dead than alive. Though they still retained their personality, they have no heartbeat. Nor can their bodies heal. It’s also worth mentioning that when the Elantrian affliction fell upon the city, the King closed their gates, trapping the afflicted inside.

Now even ten years later, people in Arelon continue to get struck down by this strange illness and those that do are tossed into Elantis forever to live the life of one of the living dead.

Now the story continues in the new capital, where one day Sarene, a princess from a neighboring country arrives to marry Prince Raoden, the crown prince. This was to be a political marriage whose purpose was to unite the two nations against the religious imperialists of a neighboring hostile country. But when she arrives in Arelon, she is informed that Prince Raoden, her husband to be, is dead.

Of course, we learn in the opening pages that the crown prince Raoden is struck down with the Elantrian affliction days before his wedding, and is now banished to the city of Elantris — the city of the dead. But the king made sure that nobody discovered what really happened to his son and as far as anyone else knows, he died. But his story doesn’t end, and we are privy to what life is like in Elantris, through his eyes.

Princess Sarene stays in the court, determined to carry on the fight against the religious and very dangerous zealots who have conquered nearby countries. In so doing, she clashes with and makes an enemy of Hrathen, a scheming high priest of the repressive religions who recently arrived in the city.

What follows is political and social intrigue as there are plots and schemes to undermine the king, there are Hrathen’s plans to take over the capital and Raoden’s day-to-day trials as he adjusts to everyday life in Elantris as one who is dead yet not dead.

So I found this story utterly gripping and enthralling and completely original. I can’t begin to express how much I adored this book. We have several main characters with strong moral principles and unwavering personal integrity who are willing to sacrifice and face insurmountable odds and do what it right. Even one of the villains ended up being someone that the reader could sympathize with, which I did not see coming at all and whom I found utterly fascinating.

And the plot — it was so original, so entertaining and so captivating that this story kept me turning the pages hours past my bedtime! So in this way, Elantris was, at least for me, unputdownable. The world that Sanderson gives to us in Elantris is unique, sophisticated and captivating with an imaginative magic system and I’m so glad I went on this journey.

The story was nicely wrapped up at the end with a satisfying conclusion and even though it was a rather lengthy novel, I was disappointed to see it end. I wanted more!

In summary, I loved the plot, loved the characters, loved the book — and I ended up giving this gem of a novel 5 stars. This book also turned me into an instant Brandon Sanderson fan, and I can’t wait to read the rest of his back catalog.

Click HERE to check out or to purchase Elantris