You are here: Home / Library / Anaconda! 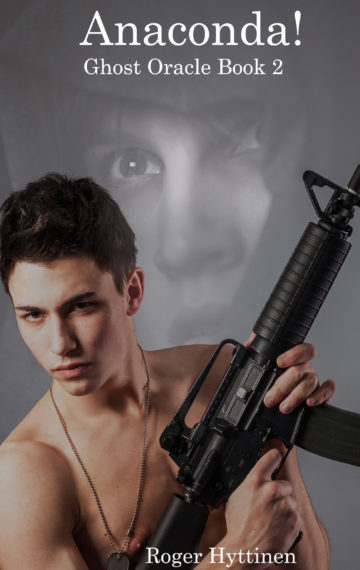 http://www.amazon.com/gp/product/B00T57NAVA/ref=as_li_tl?ie=UTF8&camp=1789&creative=9325&creativeASIN=B00T57NAVA&linkCode=as2&tag=bloofroghyt-20&linkId=OFWN3G655MMZQFWVKoboBarnes and Noble
Just a few short weeks ago, sixteen-year-old Nick Michelson discovered that he was a psychic medium destined to help restless spirits cross over to where they belong.  One evening while working after-hours at his high school, an especially frightening ghost of a bloody soldier appears to Nick and attacks him. Nick sets out on a quest to learn who the ghost is and why he is haunting Nick’s high school.  Using his deck of tarot cards as a tool, he gradually begins to unravel the mystery surrounding the ghost’s death.
.
Meanwhile, Nick is experiencing disturbing dreams and visions during which he witnesses, through the eyes of a killer, the brutal mass murder of several of his classmates at his high school. As Nick gets drawn deeper and deeper into a web of mysteries surrounding his nightmares and the ghost of the soldier, he begins to suspect that the two are related — and that the horrific scene from his nightmares is actually a premonition of events that may — or will — come to pass.
.
Nick must solve the riddle of his enigmatic premonitions and race against time to somehow prevent an unknown killer from shooting up his school — and not become the shooter’s first victim in the process.
.